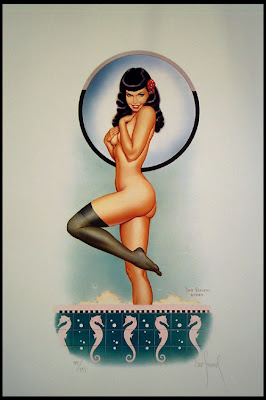 I'm on my second day off work as I try to get used to new blood pressure meds so maybe that's why I'm having a tough time figuring out what to say about Dave Stevens who died the other day. He was a favorite of mine going all the way back to the seventies when I first saw some unpublished DOC SAVAGE panels and later some Chuck Norris art he did. I became enamored with his ROCKETEER and, around the same time (like many folks), with Bettie Page. Dave Stevens provided a number of covers for various comics during the big independent comics boom of the eighties and whether his covers featured pretty women, slimy monsters or cute puppies (or in some cases all three), they were the kind of covers you would linger over and remember long after the comics themselves. Never met him but I'm sadder knowing he's no longer out there. Thanks, Dave.
Posted by Booksteve at 3:38 PM