Movies That Fell Through the Cracks # 36 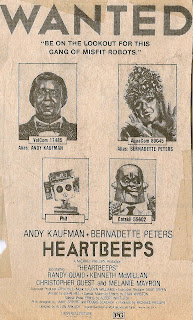 Andy Kaufman was either a comedic genius or had some serious mental issues…or both. What he is rarely considered, however, is an actor. That said, he effortlessly stole many episodes of TV’s TAXI from its great ensemble cast and was given exactly one opportunity to get top billing in a feature film—1981’s HEARTBEEPS.
Although it has a lot going for it, HEARTBEEPS is a cult film that never happened. The fact that it features a musical score by John Williams is proof that this was intended to be a much bigger film than it turned out to be. The fact that it was directed by one of my favorite directors, HEROES’ Alan Arkush, known mainly at the time for his cult classics HOLLYWOOD BOULEVARD and ROCK ‘N’ ROLL HIGH SCHOOL( as well as the soon to follow GET CRAZY from 1983), shows that it really was a long shot.
Andy Kaufman had played a robot character in a failed sci-fi sitcom pilot from 1977(which is probably still up on YouTube) entitled STICK AROUND. In this movie, he was once again a robot, this time in love with (and who wouldn’t be?) another robot played by Bernadette Peters (herself the Dick Clark of Broadway actresses).
HEARTBEEPS is slow but sweet, amusing but not really funny. For the film fan, the fun is in spotting folks like the ever-popular Dick Miller in the cast along with the ever-welcome team of Mary Woronov and the late Paul Bartel. Bigger names amongst the co-stars include Christopher Guest, Randy Quaid (both soon to be SNL stars at the time), director/actress Melanie Mayron and the great character actress Kathleen Freeman.
Kaufman would shoot his "performance art" reputation in the foot in subsequent years, alienating his fans over and over with his insistence on wrestling women and his bizarre Tony Clifton persona (often not even played by Andy but by his co-conspirator Bob Zmuda!). Because of his bizarre history, his unexpected death in 1984 from lung cancer was seen by many as yet another outlandish prank.
HEARTBEEPS was quickly forgotten by most with neither Kaufman’s or Peters’ respective careers affected in any way whatsoever.
Posted by Booksteve at 11:02 PM