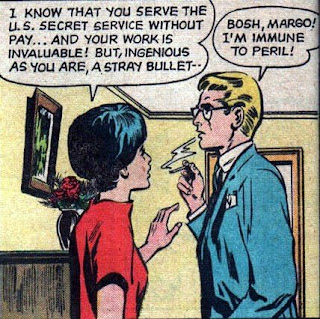 One could easily argue that the entire Archie Comics run of THE SHADOW from the early 1960's represents comic book weirdness! Instead of the grim avenger of the night, nerdy blond millionaire Lamont Cranston is secretly a government secret agent. When he takes off his glasses and puts on a cape he can hypnotize bad guys into thinking he's invisible. In later issues, his blond haircolor changes and he adds a pretty cool super suit but heck, he still ain't the Shadow. Anthony Tollin must cringe every time he thinks of this ultra-bland John Rosenberger-drawn version! I love this panel, though, where the cocky hero (a smoker yet!) blows off concern from his sidekick, the lovely Margo Lane (who in this version has no idea her secret agent boss is also the Shadow!).
Posted by Booksteve at 11:14 PM