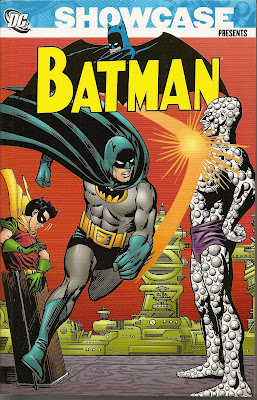 Now here’s a real treat (and after this past week, I could use one). This latest DC SHOWCASE edition features the mid-sixties BATMAN and DETECTIVE stories of the Caped Crusader. These very comics are, in large part anyway, responsible for the fact that I collect comics at all! In fact, I’m on record in several places as crediting the May, 1966 issue of BATMAN (with that gorgeous Gil Kane/Murphy Anderson cover!) as being not my first comic book but the first comic I ever kept! DC’s Mark Waid once stated in print that it was his, too. He then elaborated in an email to me that, being the issue published closest to the premiere of ABC’s phenomenally successful BATMAN TV series, "Death Knocks Three Times" was probably alt of kids’ first comic!
The run reprinted here is often cited as being "camped up" to resemble the lighthearted TV series more than the "New Look" stories that had just preceded it. I think that’s an unfair comparison. While there is a bit more humor here in the dialogue, the stories themselves are still mostly serious. In these pages, along with the return of the Joker for the first time since Editor Julie Schwartz’s revamp, we meet the Blockbuster, the Cluemaster, the Outsider, Poison Ivy and, for the first time since his forties creation, the Riddler moves to the A-List of Bat-foes.
Written mostly by Gardner Fox and John Broome (each of whom includes himself in one of his stories) with a few by Bob Kanigher (including the aforementioned # 180) and the series now-acknowledged co-creator Bill Finger, the stories are mostly clever light mysteries with little actual character development but then that was the DC standard at the time.
Much of the art, actually credited properly now to Sheldon Moldoff ghosting as "Bob Kane," is stiff and yet somehow consistently enjoyable. In fact it’s moreso now that I have a bit of an understanding of what was actually going on --Shelly trying to keep Kane’s style and yet adapt it to Infantino’s "New Look" so that it seemed less cartoony. Inker Joe Giella’s light touch was never a favorite style of mine but it works here, certainly moreso than Sid Greene’s occasional pieces. Loved Greene over Gil Kane on GREEN LANTERN but here, he gives everything a kind of odd look that just turns me off. A number of the strips are still done here by Infantino, also, with his highly influential stylized look for the Dynamic Duo. Even his famously iconic pull-out posters, done with Murphy Anderson are reprinted here (on single pages).
So many of these particular stories bring back very specific memories to me. I remember pulling # 180 out of the rack at the drugstore for the first time, I recall sitting on the school steps on the first day of the second grade with a copy of DETECTIVE 356. I remember getting a copy of BATMAN 184 at a bus station in the middle of the night on a summer trip to North Carolina. I remember sitting in the car waiting for my mom to pick up something at her job and reading "The Joker’s Original Robberies" in BATMAN 186 and on Timmy Wheeler’s front porch on a Sunday afternoon devouring "Hate of the Hooded Hangman." THAT’s why they call it nostalgia!
Still to come in the next volume would be the million dollar debut of Batgirl, the last of any pretense that "Bob Kane" had anything to do with these stories and the beginnings of the Dark Knight as he’s come to be. Stay tuned to this Bat-channel for more Bat-thrills!
Posted by Booksteve at 8:29 AM