Jerry Siegel and the Spider 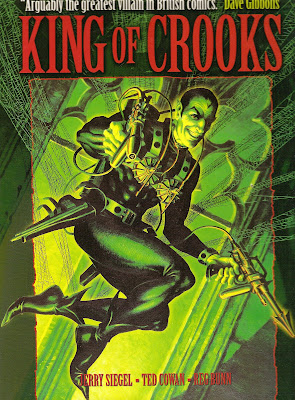 I never met Jerry Siegel but I ALMOST did! Jerry was scheduled to be a guest at the one San Diego Con I attended in the late eighties but was taken ill at the last minute and had to cancel. I had brought a copy of SUPERMAN # 50, the oldest issue I had, to get signed but alas.

In Gerard Jones indispensible history of comics and the men who created them, Siegel comes across as the most tragic man in comics. On the one hand he created Superman, the one character around which the entire industry built up. On the other, in spite of his imaginative plotting he was a writer of only passable skills and was never able to recreate his success or regain his creation. For DC, he did create THE SPECTRE but even that character was not a raging success initially. After the lawsuit, along with Joe Shuster, he created FUNNYMAN, a trivia question hero if there ever was one. In the sixties, he wrote many exciting but often ludicrous adventures of THE LEGION OF SUPER-HEROES before leaving DC again due to legal efforts to regain his original creation. He turned up at Archie where, as "Jerry Ess," he wrote many of that company's "ultra heroes" including THE MIGHTY CRUSADERS. With a reputation for outrageously bad dialogue, he faltered quickly with Marvel "realism," leading to the briefest of stints at that company. In

the eighties, there was one last effort to make it in the growing Independent comics field but the grand old man, although revered by the current fans and creators, still couldn't make it work.

Lost in all of this was a strip I had never even heard of until recently, THE SPIDER! Superman's creator took over the already successful British strip running in the weekly story-paper LION in 1966 and wrote the Spider's serialized adventures for the next two and a half years!

The Spider was a weird looking pointy-eared criminal mastermind who traveled on webs he created and attempted to become the world's greatest criminal while wearing a jumpsuit that included elf boots and some kind of psycho bondage bra!

This book, KING OF CROOKS (note the name "Spider" not mentioned anywhere on the cover, probably for the same reason DC's Captain Marvel is called Shazam) reprints the first three SPIDER stories with the third being Jerry Siegel's debut, "The Spider V.

Dr. Mysterioso." According to the introduction in this Titan hardcover, Jerry had chosen the strip to write when he had been sent copies of LION. In his later strips, it says that he made the character more of an anti-hero, using his skills to stop other super-criminals. Jerry is credited with bringing an authentic American feel to the otherwise made in Britain but set in America feature. Even his dialogue worked. The first example here, done before Jerry arrived, is just as outrageous as anything he would write here! This was a good fit for him. Upon his departure in 1969 (Why if it was so successful?), THE SPIDER passed into other hands but continued for only a few more months. Jerry entered the seventies at a low point but would end on a note of public triumph when DC was shamed into giving Siegel and Shuster financial and creative recognition in order to avoid bad press when the multi-million dollar SUPERMAN-THE MOVIE came out.
KING OF CROOKS came out a few years ago and is still available by special order from your local bookstore in the US. I got mine through Borders last week.
Posted by Booksteve at 9:02 PM