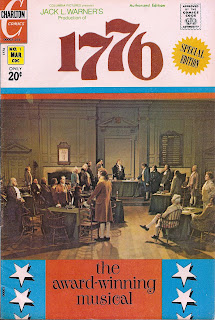 Longtime readers will recall that both my wife and I are big fans of the film version of the Broadway musical 1776. Here, from 1973, we have the Charlton comics adaptation of said musical. About as oddball as anything you'll find over at Scott Shaw!'s Oddball Comics, this is, as I said, an adaptation of a musical...without music (in spite of what the cover says). As seen in the panels here, the lyrics of the memorable songs are quoted as dialogue...making them seem in

context to be particularly inane. In fact, Joe Gill's "adaptation" virtually eschews any real narrative in favor of panel after panel of disconnected illustrations of scenes in the film. The art in those panels is by the prolific (if not particularly revered) Tony Tallarico who does a pretty fair job of capturing the likeness of some of the actors, particularly William Daniels (TV's former CAPTAIN NICE) as John Adams. Note also that despite the presence of the comics code on the front cover and the substitution of "blazes" for the rhyming "hell" in one of the reprinted panels, there appears still several dozen less than reverent references to "God" and a couple of "damns" and "dammits." Perhaps the code made exception because it was a musical? Historical? So under the radar they

passed it without looking at it? Anyway, it's a pretty kitschy comic book. I recommend the DVD of the restored film itself. That's what my wife and I will probably be watching tomorrow for the quadrillionth time. Happy Fourth! By the way, ace researcher DEREK Tague does one heck of an imitation of Howard (Benjamin Franklin) Da Silva. If you see Derek in New Jersey this week, ask him to do it for ya!
Posted by Booksteve at 11:35 PM