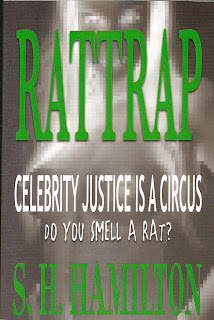 In the interest of full disclosure, let me say that Sarah Hamilton, the author of RATTRAP, is a ‘Net acquaintance of mine. Let me also say that in spite of living a stone’s throw from downtown Cincinnati, I have never in my life attended a football game. That said, and with a few caveats, I found RATTRAP to be a riveting, fast-paced thriller loaded with well-delineated characters. Self-published three years ago, it is clearly an amateur work and yet cocky enough to refuse to admit that.
The basic storyline deals with a female reporter with a troubled past and her investigation into allegations that the Pittsburgh Steelers’ number one draft choice raped a cheerleader. Much of the first half of the book deals with the behind-the-scenes machinations of the player’s unscrupulous agent as his attempts to spin doctor the situation are consistently undermined by the player himself. As we get into the second half, though, the whole thing somehow turns into SILENCE OF THE LAMBS redux.
In spite of the rambling narrative, Sarah manages to create not one, not two but a whole series of compelling, nuanced characters. Dexter Curtis is the black football player whose public image belays his true nature as a drug-taking sexual predator. Kim McConnell is the bisexual, promiscuous cheerleader with a background of drugs, abuse and suicide attempts. Jolyn Knowlton is the heroine, a tough but psychologically scarred reporter with a past that included her illicit lover being murdered in Israel. Nathan Redmond becomes the ultimate villain of the piece. He’s a mortician who moonlights as a killer for hire. On the side, though, he is a learned gourmet with a taste for human flesh. The more background Redmond gets as the book goes along, the scarier he becomes.
Written in the most explicit language imaginable, Sarah’s use of extreme detail in the sex and drug scenes adds immensely to their reality. Her trademark has always been the colorful turn of phrase and that, too, is well-represented in RATTRAP.
My main problem with the book is that it could have used a good editor. Said professional would have fixed the occasional mixed-up sentence structures, eliminated the consistent use of characters’ names when speaking amongst themselves, insisted on the use of contractions in the otherwise realistic dialogue (one thing I learned-ALWAYS read your dialogue aloud, preferably to someone else. If it doesn’t sound real, fix it) and not allowed so many of the pivotal moments of the story to occur "off-screen" as it were.
Even then, RATTRAP sucked me in and its short chapters carried me forward quickly. The one thing I truly missed was the author’s noted sense of humor. For the most part, it appears here only in its darkest form. Some of the more intense scenes could have been broken up by a bit more light-heartedness.
Although at times confusing, for adults RATTRAP is a fast-paced read and a nice look at the developing take-no-prisoners style of a very cocky, talented writer whose future books I eagerly await.
You can buy RATTRAP from Amazon here: Amazon.com: Rattrap: Books: S. H. Hamilton and here’s Sarah Hamilton’s own site, MEKASEFA, from where you can link to some of her online erotic fiction.
Posted by Booksteve at 7:54 AM