Movies That Fell Through the Cracks # 26 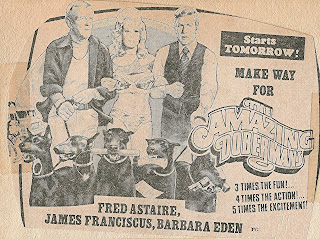 THE DOBERMAN GANG was a surprise hit in 1972. It was a low-budget picture with a no-name cast but it had a gimmick that clicked with filmgoers—trained Dobermans. Inevitably, it was followed a year later by a sequel, THE DARING DOBERMANS which, while it had at least a few familiar faces, was simply more of the same. Today’s movie-that-fell-through-the cracks is the third and final theatrical Doberman entry ( there were several TV movies later on). THE AMAZING DOBERMANS, released in 1976, had a bigger budget and the whole thing went pretty much to the casting. Fred Astaire, one of the truly GREAT film performers of the twentieth century, toplined. TV faces Barbara (I DREAM OF JEANNIE) Eden and James (MR. NOVAK, LONGSTREET) Franciscus, co-starred. Well, actually, Franciscus, a stiff but likable actor, was the main character. On the run from gangsters to whom he owes a considerable amount of money, he first meets a man who controls five of the big dogs with a device. He then joins a circus. He then convinces the man with the dogs to join the circus to help him get back at the gangsters who’ve tracked him down. It’s all very matter-of-fact and the dogs have less screen time here than in the others (gotta show that human talent they paid the big bucks for, I guess). It’s kind of entertaining and certainly moreso than the other Doberman entries due to the great cast. Said cast also included Billy Barty, Jack Carter (a so-so standup comic who was often well-cast as villians in movies and TV series of the period) and my late friend from the radio conventions, Parley Baer! Fred Astaire would continue a trend of appearing in unusual places for the remainder of his career, ending up in an episode of BATTLESTAR: GALACTICA and his final role as a skinny Kris Kringle in THE MAN IN THE SANTA CLAUS SUIT!
Posted by Booksteve at 11:44 PM