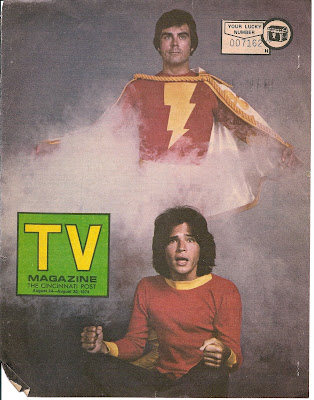 I’ve been posting quite a bit on Captain Marvel lately but mostly the original, 1940’s version. Can’t forget that during the seventies revival, the good Captain actually made it to television! SHAZAM! Was a dull show, actually—cheap-looking, modernized, and incredibly preachy. Still, it WAS Captain Marvel. Jackson Bostwick, seen here, was the first actor to play the part, being replaced along the way (in a dispute of which I’ve heard several variations) by one John Davey. Bostwick certainly looked the part with his dark-eyebrowed facial features but the longish hair kinda blew it (don’t even get me started on Michael Gray as Billy!). Davey wasn’t bad except for what appeared to be a broken nose and no acting talent whatsoever. Radio veteran Les Tremayne costarred as "Mentor," a character that the comic book version made into a newly mustachioed "Uncle Dudley." Billy and Mentor traveled around the country in an RV writing wrongs and teaching lessons. It’s what Saturday morning television did in the mid-seventies. Sigh. When this series ended, an animated version appeared but I was so fed up with network kids shows that I never saw a single episode.
Posted by Booksteve at 7:56 AM