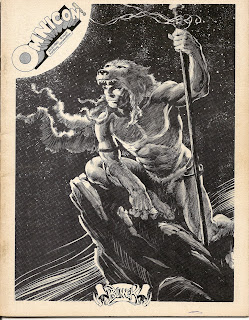 As Comicon rages on without me (although I have it on live on G4 in the background even as we speak) here are a couple more convention booklets I've collected over the years. Omnicon was a Louisville, Kentucky convention in 1976 that was put on by Keno Don Rosa and James Van Hise. The biggest convention I had attended at the time, guests included cover artist Frank Brunner and STAR TREK's DeForest Kelly. Wearing my Trek uniform shirt in time-honored geek manner, I stood next to Kelly as he was interviewed on local TV. The con book is in the format of the fanzine, RBCC (not so coincidentally edited by Van Hise) and contains mostly reprints from that venerable publication including some early Don Rosa art and a cool SUB-MARINER strip by Mike Zeck.

I attended Omnicon with 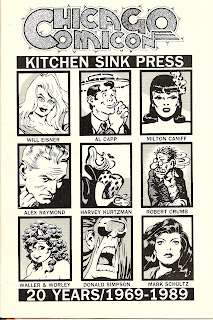 my parents but I attended the 1989 ChicagoCon with my then fiance. I've written about this convention before. This was where Reed Waller and the late Kate Worley asked us to hang out with them at an after hours party and we were too awestruck to do so. This was where my soon-to-be wife got so incredibly ticked off at Peter David on a panel and yet respected him enough to decide to name our future son (BookDave) after him. Her real goal that year was to meet her fave Wendy Pini and we did but Wendy came across as shy and demure (after Kate Worley who wouldn't?) and a far cry from the sword-wielding Red Sonja she had been when I had met her in Philadelphia back in 1977. This was where we met and hit it off with John Ostrander and the late Kim Yale, a tough, talented woman who died far too soon. Also, we sold Denis Kitchen some L'IL ABNER metal signs and had a nice long talk with him. Denis has long been one of my favorite folks in the comics business. Finally, this was the place where we watched Golden Age BATMAN ghost artist Dick Sprang introduce himself to DC head Jenette Kahn over her breakfast table at the hotel restaurant. Ahhh...memories. I hope this year's ComiCon attendees come away with cool memories like those and not just nightmares of the crowds.
Posted by Booksteve at 8:29 PM