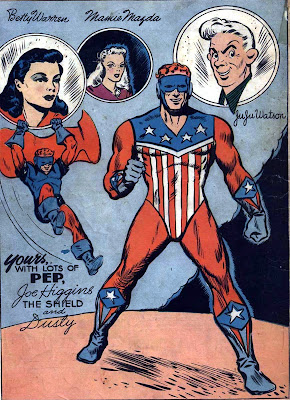 No, not the TV series, the superhero! The very first (predating even Captain America!) patriotic superhero was the Shield from MLJ (the future Archie) Comics. Drawn by Irv Novick who would later go on to be one of the major Batman artists of the late sixties and throughout the seventies, the Shield's World War II homefront adventures were often hair-raising tales of gangsters, spies and monsters. With his young sidekick (Hey, it was a trend) Dusty, Joe Higgins not only fought evil as the Shield but seemingly even edited some of the comics he was in! For awhile, the inside covers of PEP featured editorials supposedly by Higgins. Even the very first appearance of ARCHIE who would later take over the whole darn company was preceded by an almost apologetic editorial from "Higgins."If you joined the Shield's patriotic fan club, you wrote directly to Higgins!

In the sixties revival, the Shield was actually the SON of the original Shield, a hapless loser whose personal life consisted of going from one menial job to another while fighting aliens and villians as a hero on the side. He also drug his father who had been turned to stone by an old enemy around with him hoping to find a cure! No word on what happened to Dusty except that in the classically bad MIGHTY CRUSADERS outing, "Too Many Super-Heroes," he turns up briefly with little explanation!
In the last couple years, Archie has reprinted a number of the early SHIELD stories in a trade paperback collection. Check your local comic shops for a bit of history!
Posted by Booksteve at 6:09 AM