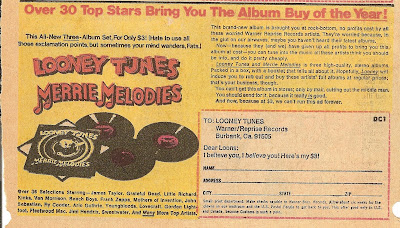 Okay, here's a good one. This ad from an early seventies comic book is for a 3-Record set Warner Brothers LP entitled LOONEY TUNES AND MERRIE MELODIES featuring Elmer Fudd on its sleeve cover. Now logically, this record would feature songs and music associated with the classic Warner Brothers cartoons, from the two series LOONEY TUNES and MERRIE MELODIES. I mean, seriously, that isn't too much of a stretch is it? BUT...! Apparently the WB of the day thought it would be just amazingly hip and groovy to utilize the legendary properties that most kids, even then, had grown up on in order to sell MORE albums by folks whose albums otherwise weren't doing so well! The NERVE! Well, no, to the best of my knowledge, the Nerve did not have any songs on this set. According to the ad, though, the folks that do included an eclectic mix of groups and singers. Some (like Little Richard, the Beach Boys and John Sebastian) were then currently on the outs with the record-buying public while others (including James Taylor and Van Morrison) were on the rise. The ill-fated (but wonderful!) Sweetwater appears undoubtedly along with more totally forgotten bands like Lovecraft. I never had the album but I remember thinking even then..."What the hell does this have to do with my favorite cartoons!!??"
Posted by Booksteve at 8:27 PM