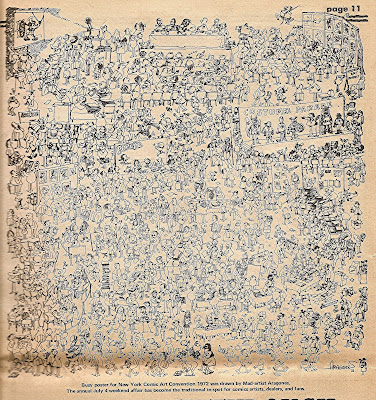 From the pages of a 1972 issue of THE MONSTER TIMES, here's proof that even back in the day comic book conventions were overpopulated pop culture geekfests. This poster was done for Phil Seuling's legendary July 4th New York City Con by Mark Evanier's homeboy (and Groo's daddy) Sergio Aragones. For hours of fun, click to enlarge and just pretend to roam around the aisles. It's almost like being there (only without Peter Sellers).

I once saw artist Mike Grell on a panel at ChicagoCon describing different artists' approaches to the same material. In particular, he described a script that called for (as I recall) a rider to reach the top of a hill and see a thousand screaming men on horseback coming at him from the other side with weapons and charging elephants. Grell said his approach was to draw a large closeup panel in which all you saw was the rider's frightened eyes. By contrast, he noted, Sergio would more than likely draw TWO thousand men on horseback with weapons, elephants, rhinos and dinosaurs and then throw in a few gags around the edges! Grell then added that this would take Sergio about ten minutes to draw.
Posted by Booksteve at 7:18 PM