A Busy Week For Death 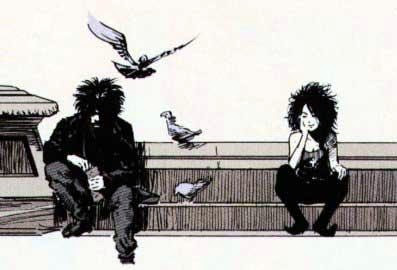 The little baby in the first SANDMAN to feature the main character’s sister, Death, asks, "Is that all I get?" I suppose it’s inevitable that it never really seems enough for any of us. And it all happens in what seems like the blink of an eye. Maybe I’m just at an age where it feels like things are moving so incredibly fast. Maybe it’s because I’m notorious for not living my life in a linear fashion. Sort of like Billy Pilgrim in Vonnegut’s SLAUGHTERHOUSE FIVE, I tend to be "unstuck in time," at least in my own head. Now Vonnegut’s gone. Yesterday, Joel Siegel, GOOD MORNING AMERICA’s optimistic movie critic for nearly three decades died. A little more than a month ago, he wandered into the store where I work and bought a book on Jackie Robinson. While he was there, I reminded him of a time my wife met him on the GMA set back in 2001.
This past week, my friends Brittany and Cassandra each lost someone. Death was

having a busy week. Last evening, though, she found the time to drop by our house where my wife’s mother had been living with us since Tuesday. Two years after discovering inoperable cancer, she had remained surprisingly healthy on the outside until relatively recently. A month ago, though, she ended up in hospice with perhaps only hours to go. She rallied to the point where she was released…not once but twice!... but slipped into a light coma not long after coming to stay with us. Suddenly, the months of excruciating pain and painkillers by the carload seemed to fall by the wayside and she had several long days of seemingly peaceful sleep and pleasant dreams. She was no doubt pleased to see Death.
Thank you, Neil Gaiman, for SANDMAN # 8, itself now 18 years gone! I re-read the issue (for about the fiftieth time) last week and somehow, as always, it spoke to me as it has to so many others. It makes it all seem so natural. Since the very first time I read it, I have not feared Death. I am in awe of her and have a keen sense that each breath brings her closer. Naturally.
Posted by Booksteve at 7:18 AM