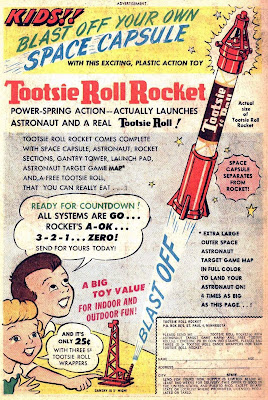 The other day we mentioned the so-called "space race" between Russia and the US to see which one would achieve this or that "first" in space. It's generally conceded that once the US landed men on the moon...well...we won. Leading up to that climactic 1969 moment, however, were a million or so cool rocket toys including this one--a Tootsie Roll rocket!
Posted by Booksteve at 9:55 PM