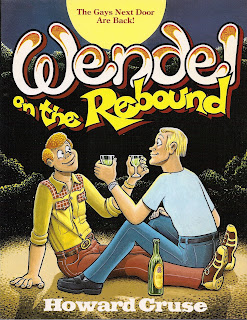 One of my favorite cartoonists is Howard Cruse and one of my favorite strips is WENDEL. WENDEL, in case you aren't familiar with it, ran in THE ADVOCATE from 1983 to 1989. Now not being a gay man, I don't tend to read THE ADVOCATE but working in a bookstore, I did run across this book, WENDEL ON THE REBOUND, back in the early 1990's. I remembered Cruse from his ultra-clean cartooning on the strip BAREFOOTZ in the Marvel/Kitchen Sink hybrid, COMIX BOOK. It stood out so much from the style of the other major underground cartoonists that he almost seemed...well..normal. Cruse went on to found and publish GAY COMIX as well as starting WENDEL. WENDEL was far from a gay version of PLAYBOY's LITTLE ANNIE FANNY in spite of the main character's slight resemblance to Kurtzman and Elder's GOODMAN BEAVER (upon whom Annie was supposedly based). No, Wendel was the perhaps somewhat autobiographical tale of a young gay man and his friends trying to find happiness insomething pretty much akin to the real world. The strip had heart, hope and humor. Only on rare ocassion was it particularly explicit. For the most part, it was sort of like life. You know people are up to something when they're alone but you don't usually see it. If you're the least bit homophobic, stay away. The strip's very insistance on normalcy and the acceptance of various gay lifestyles would definitely grate on you. If, however, you're openminded enough to simply enjoy a great cartoonist at one of his peaks, haunt your local comic shops for WENDEL in any form you can find him.

Howard Cruse went on to do the much more serious, downbeat but brilliant DC/Paradox graphic novel, STUCK RUBBER BABY and is currently one of us here on the blogosphere! Or rather here:Loose Cruse: The Blog on the blogosphere. Hi, Howard!
Posted by Booksteve at 7:57 PM