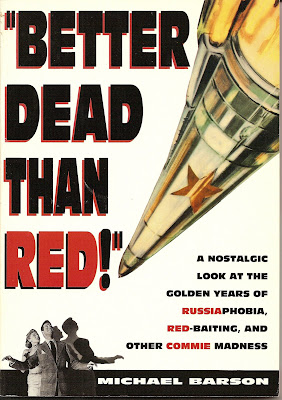 All of this recent talk about a new "Cold War" reminded me of today’s offering from the Library, BETTER DEAD THAN RED! Published in 1992 and written by pop culturist Michael Barson (the man who had previously brought you the Marx Brothers’ FLYWHEEL, SHYSTER AND FLYWHEEL book), this book is self-described as "…exemplifying America’s xenophobia at its greatest excess." Heavily illustrated with historic photos, ads, comics and posters from "…the golden years of Russiaphobia," BETTER DEAD THAN RED is at once satirical, scary and downright laughable. Providing to some extent a brief historical perspective on communism and the rise of the Soviet Union, the book mostly touches on the pop aspects of the "red scare" as our national fears were exploited for the good old American dollar! Lots of stuff on the space race, Sputnik, bomb shelters, Khrushhchev and Castro but also pages from magazines including the famous TREASURE CHEST comics feature, "This Godless Communism" drawn by Reed Crandall (whom you may recall from yesterday’s NoMan feature). Movie posters and ads abound such as this true story adaptation of the popular radio series I WAS A COMMUNIST FOR THE FBI. Ironically, the radio series starred movie star Dana Andrews whereas this feature starred radio actor Frank Lovejoy (THE BLUE BEETLE). 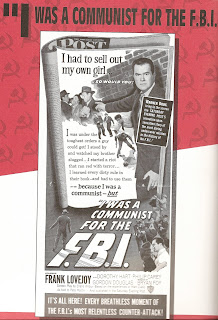 When I was a kid, it was all still going on. We regularly had "civil defense drills" in which we were led in an orderly fashion down to a subbasement at the school (next to an ancient coal chute) and told to "duck and cover" up against the far wall. Not sure how long these drills went on but we never horsed around like we did on fire drills. No way, Jose! As unlikely as a FIRE was in real life (??), we knew that at any given moment, those evil Communists might launch a completely unprovoked attack on us kids with nuclear weapons! In fact, I had one teacher who regularly "reassured" us that, in spite of our drills, we would die quickly as the Russians had undoubtedly long since targeted a nearby munitions plant! Strangely, in all my years in this area, I’ve never really heard anything about a big munitions plant anywhere around her from anyone except that guy!
Somewhere before the seventies, we stopped the bomb drills. In the early seventies, suspected commie Howard DaSilva gave a brilliant Broadway and motion picture performance as American uber-patriot Benjamin Franklin in 1776…and then turned right around and portrayed Khruschev in the

TV play/film THE MISSLES OF OCTOBER. The lines were blurring.

In the early eighties, I dated a girl whose family was still prepared for the bomb. Their basement doubled as a bomb shelter and the walls were lined with stocks of water, crackers and feminine hygiene products! Then came Glasnost and Reagan and Gorbachev and the fall of the Berlin Wall and it was all over. Cold war novelists had to switch their evil communist plots to missing Soviet weapons and rogue KGB officers. Gorbachev himself actually appeared on the big screen in one of the greatest cameos of all time in the German film, FARAWAY, SO CLOSE!

And now the Russians (and the world press) seem to want all of that paranoia back! Don’t we have enough to worry about with our own leaders at this time? Sigh. Like in the real world, we dream of a simpler time. As paranoid as you feel when you finish this book, there is undoubtedly a certain nostalgia involved, also. BETTER DEAD THAN RED is fun in a sense but at the same time, it was all too real…and the nightmares aren’t necessarily over yet.
Posted by Booksteve at 10:22 PM