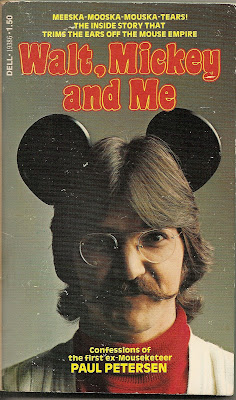 WALT, MICKEY AND ME is the title of the 1977 book by former child star Paul Peterson in which he says some less than flattering things about the Disney folks, then catches up with his former fellow mouseketeers. Last night my wife was flipping channels and briefly lit on one of the entertainment/gossip shows when she recognized Paul. Oddly, even thirty years after this book's publication, he was discussing what happened to his fellow mouseketeers as well as the members of the mid-seventies NEW MICKEY MOUSE CLUB which was just starting as the original book came out.
Paul Peterson himself had been fired from the original group after only a few weeks for "conduct unbecoming a mouse." If I recall correctly he punched out Mickey Rooney's kid. I first knew him as Donna Reed's son Jeff on my mom's favorite sitcom of the early sixties, THE DONNA REED SHOW. In retrospect, Herman and Lily Munster were a more realistic couple than Donna and her doctor husband but it was still fun. He didn't work too much as an actor after that, though, and eventually drifted into writing pulp novels. Although it wasn't easy, Paul managed to get through all the rough times associated with suddenly no longer being the flavor of the month child or teen star and decided to help other child stars and former child stars to do the same.

A Minor Consideration Website details the history and ongoing work of the impressive organization that Peterson eventually founded. For every former child star who gets in trouble, there are probably three more who don't just because they had Paul's group to help. Being a child star is something that will forever be alien to most of us and in a way it's easy to make fun off them because we weren't there. In most cases, their childhoods were sacrificed so they could be a star. It's like play to a child actor in a way but then when it goes away, they are quite literally lost. Usually without the best of education, all they know how to do is act or be cute and when those awkward years hit, it can be a nightmare to any teen. Not only that, many child stars become more self-conscious as teens and young adults and the natural acting talents they had shown early on often fade. As an example, Shirley Temple as a four year old was a talented actress. As a teen, she was cute, dull and lifeless and it looked like she was trying way to hard.
Outside of a few school plays, I was never a child actor but I always hated to hear horror stories about my TV friends--Anissa Jones, Trent Lehman, Dana Plato and so many others. Paul Peterson hated to hear them too and he's done something about it. Paul Peterson may not have lasted long as a mouseketeer but he's long-since become one of my real-life heroes. Thanks, Paul.
Posted by Booksteve at 9:12 PM