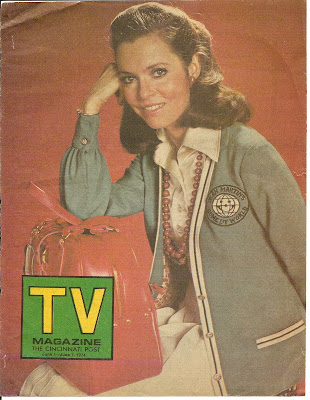 Recently I wrote of first seeing Monty Python on a Dean Martin summer replacement series but I couldn't recall the name of it. Here we see the lovely and sensual Ms. Barbara Feldon (post 99) with a jacket that solved that little mystery. Suddenly it all came back to me. DEAN MARTIN'S COMEDY WORLD ran in the summer of 1974. Dean Martin himself did not appear as that was the whole point. It was a place holder until his series returned in the fall. The series was hosted by Jackie Cooper, Ms. Feldon and Nipsey Russell and spotlighted classic clips from films and television as well as presenting more contemporary comedy bits from around the world. Thus...Python. I enjoyed the show myself but it's quick-cut editing was way ahead of its time and it was not a hit.
Posted by Booksteve at 9:33 PM