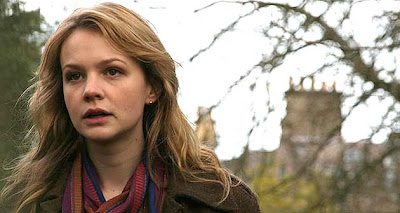 Y’know, this past weekend’s episode of DOCTOR WHO had a lackluster trailer that made me put off watching it until yesterday. Now that I have, however, the episode, entitled BLINK, may well be my favorite of the current series! Every season, there’s one episode where they give the stars a rest and build the episode around guest stars. The Doctor and his companion appear only briefly. Prior episodes of this sort were quite well done and never left the audience feeling cheated that the leads weren’t more front and center. BLINK actually works best when they aren’t there!
First of all, though, it isn’t a perfect episode. For one thing, the basic plot of the Doctor and Martha being trapped in 1969 without the TARDIS would be negated if he would simply contact his 1969 self (Troughton) for assistance. Failing that, the Brigadier and UNIT could surely help. Or did that oft-mentioned "time war" that killed all of the other time-lords eliminate his own earlier incarnations also?
Anyway, granting them that one point that our heroes can NOT escape 1969 on their own for whatever reason, they need the help of one Sally Sparrow. Played by Carey Mulligan (PRIDE AND PREJUDICE, BLEAK HOUSE), Sally is a plucky young Nancy Drew type whom we meet as she’s exploring an old abandoned country house. On the wall she finds words half buried beneath wallpaper. As she rips off the wallpaper, it’s revealed as a message to her by name! Then things get weird! Returning to the house the next day with a friend, there’s a knock at the door. There she meets a man bringing her a message from that same friend (who she believes to be hiding upstairs) that he’s had for two decades! She goes to try to explain to the other girl’s brother that she won’t be coming back and finds him investigating a series of mysterious video clips hidden as Easter eggs on DVDs…all featuring the Doctor. She goes to the police where one of the cops hits on her and succeeds in getting her phone number. He then disappears. When her phone rings just a few minutes later, it’s him, now an old man dying in hospital but with yet another message for her. Throughout all of this, there are mysterious statues that seem to move when no one’s watching them.
See, even there it doesn’t SOUND all that interesting. There’s lots of cool bits though! The Doctor having half a conversation on tape from a transcript made of that very conversation AS the transcript is itself being made! The young policeman dying as an old man in a rain-swept hospital room. Sally meeting her friend’s pantsless brother for the first time. The Doctor’s "timey-wimey"explanation of time and reference to his own wedding! Sally’s meeting with the Doctor and Martha in which she, herself, sets everything in motion for the story just seen. Then, of course, there are the monsters—malevolent statues when you see them but ancient energy-devouring creatures when you aren’t looking. And that ending!
Add to all this first class performances all around, beautiful atmospheric camera work, the series’ trademark sense of humor and enough time paradoxes to give one a headache and I swear BLINK, based on a short story from a DOCTOR WHO ANNUAL, may just be my favorite episode yet! Well done!
Posted by Booksteve at 6:50 AM