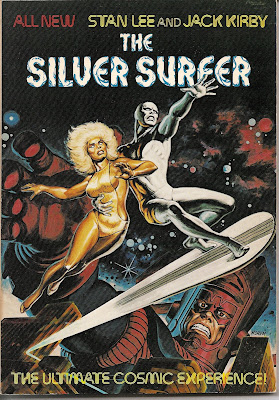 The most anticipated comic book event of 1978 was this SILVER SURFER graphic novel. It was the first (and last) collaboration between Stan Lee (who swore no one but he would ever write the Surfer) and Jack Kirby (who created the Surfer in FANTASTIC FOUR without telling Lee) after the latter's return to Marvel. It came ten years after the comic book event of 1968 (the first, origin, issue of the Surfer’s own series) which, since Kirby had not been involved, reportedly drove a wedge in the duo’s working relationship.
There are a number of problems with this book, not the least of which was that, no offense, both creators were past their prime and out of sync with each other. I adore Kirby creativity in all forms but his later stylized art is not my favorite phase. Lee’s tendency to overwrite had by this point become his standard style. Still, the most disappointing thing to me at the time was that this was not even OUR Silver Surfer. No this was some unspecified alternate universe Silver Surfer in a complete reimagining of his first visit to earth…only without the Fantastic Four! If the fan press at the time was touting that, I missed it. Thus I found myself immediately crestfallen. To be fair, the art here is some of the 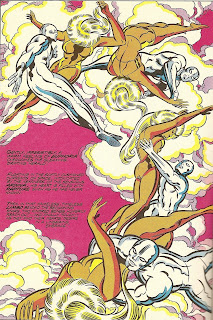 best Kirby art from his final Marvel stay but I credit much of that to inker Joe Sinnott who simply and beautifully works the symbiotic magic he always did on the artist’s FF work. Even then, though, Kirby’s fabled storytelling techniques sometimes fail him here in my opinion and the story gets confused. It also drags horribly in spots. Without Alicia Masters or Sue Richards appearing at all, Kirby creates Ardina, a golden girl who (no spoiler alert needed as it’s pretty obvious) works for Galactus. The Surfer DOES get to have some fun here, however, as in for instance his first sex scene! See for yourself. After all, the creators had to do something to highlight the fact that this was not approved by the Comics Code.

If you still aren’t sure that's what's happening here, check out the panel that immediately followed this full page romp. I mean, seriously. All that’s missing is the cigarette.
Overall, this was a serious disappointment to me then and now. From the crummy logo and "high-tech" looking fonts over Earl Norem’s less than wonderful painted cover to the anticlimactic ending. I remember sitting comfortably in my bed, aged 19, and reading this straight through and thinking…that’s it? Hopefully this coming weekend’s cinematic debut of the Silver Surfer won’t leave us old geeks with that same thought.
Posted by Booksteve at 9:22 AM