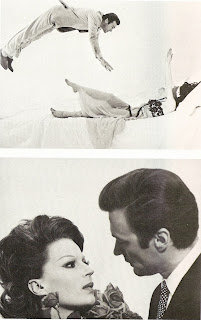 This morning on one of the cheaper cable movie channels I finally saw a movie that’s been on my "Movies I’ve Always Wanted To See" list (and yes, I do have one) for more than thirty years. Well, to be fair, I didn’t catch the whole movie but I did get to see the segment I most wanted to see. THE WITCHES is certainly the least known movie to feature Clint Eastwood. I first heard about it in Stuart Kaminsky’s 1974 Eastwood biography and re-examining that today, I’m not even sure that Kaminsky had ever seen it either.
Richard Schickel, in his 1996 Eastwood bio, gives the whole story of THE WITCHES. Seems that aging Italian sex symbol Anna Mangano was married to mega-producer Dino DeLaurentis and he fashioned a segmented film as a vanity production to highlight her vast range and send her career to the same levels as those of other Italian sex bombs such as Sophia Loren and Gina Lollabrigida. Segmented films were particularly popular in Europe at that time for all types of films. BAMBOLE, for example, was a sex comedy that used to turn up on late night TV a lot. Then, of course, there’s BLACK SABBATH with Boris Karloff’s absolute scariest performance ever!
LE STREGHE, translated as THE WITCHES, features five segments with Clint Eastwood appearing only in the final one entitled, "A Night Like Any Other." Clint’s 1965 involvement in this unlikely mix grew out of his immediate European popularity from the previous year’s Spaghetti westerns A FISTFUL OF DOLLARS and FOR A FEW DOLLARS MORE. De Laurentis made him a deal for cash AND a Ferrari!
Eastwood plays the complacent middle-class American husband of a frustrated Italian woman (Mangano) whose imagination constantly gets the better of her in a series of increasingly bizarre fantasy sequences. In one she looks more like something from Mario Bava’s DANGER:DIABOLIK as a black-suited dominatrix type with weird headgear and a gun! Looking more like HRG from HEROES than the Man With No Name, Clint’s performance is purposely monotone, dull and annoying.
Surprisingly, Eastwood’s segment was directed by the legendary Vittorio De Sica, whose SHOESHINE and THE BICYCLE THIEF are required viewing for film students throughout the world. According to Schickel, De Sica called Clint "the new Gary Cooper." While this has long since been proven, the author adds that said reputation was in no way enhanced by THE WITCHES.
Eastwood moved directly into his seminal THE GOOD, THE BAD AND THE UGLY and when all of his Sergio Leone westerns were finally released in the US, he was at long last a movie star in his own country. With that US popularity, THE WITCHES was picked up for release but quickly disappeared. Somewhere I have a third feature drive-in ad for it from the seventies with first two Leone Westerns. I can only imagine that even then Eastwood fans missed it as they decided to drive off early in the absence of their hero from the initial segments of the film.
Impossible to dismiss completely as directors of the other segments include fellow legends Pasolini and Visconti, THE WITCHES is now on American cable but I really don’t think anyone besides me will even care all that much at this late date. The good news? The fact that it HAS turned up at last gives me hope that LET'S GO FOR BROKE may turn up too!
The photos above are reprinted from THE FILMS OF CLINT EASTWOOD.
Posted by Booksteve at 12:20 PM