The Origin of the Inhumans

In late 1967 Marvel had restructured the distribution deals that had limited them to no more than a certain number of titles and were beginning to look at their first expansions. Among the characters that fans were clamoring to get their own book were the Hulk, Nick Fury, 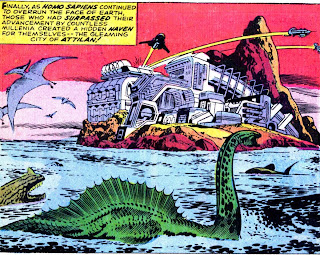 Captain America, Iron Man and the Inhumans. Within a year, all but the latter would come true. What many folks don’t know, however (or forget perhaps) is that the Inhumans DID get their own series. It was, however, a 5 page back-up series in, of all places, THOR. Replacing the venerable TALES OF ASGARD back-up, THE ORIGINS OF THE INHUMANS debuted in THOR 146, dated November, 1967. It would run only through issue 152 dated the following spring. Well written and with quite marvelous artwork, the whole enterprise was produced by Lee, Kirby and Sinnott—the same folks who would later bring you the less than satisfactory SILVER SURFER graphic novel we wrote about yesterday.
The first two chapters retcon the story as to why "inhumans" exist at all in the Marvel Universe, throwing in the alien Kree as "seeders." After that, we have the actual birth of Black Bolt, the silent (but deadly) leader of the so-called "royal family." 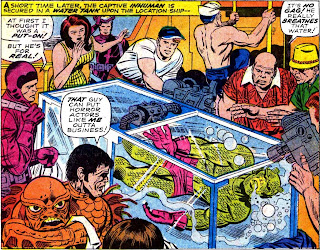 We meet the rest of our familiar characters after that, albeit in younger versions—Medusa, Gorgon, Karnak, a very young Crystal and the mad Maximus. There follows a multi-part story of Triton, the green, scaly, water breathing inhuman and his first exposure to life outside the Great Refuge. Triton gets caught up with a movie company doing a monster picture. When he escapes, he runs home to Black Bolt and suggests that the whole race hide even better than they had been because humans are nuts!
The series ended there and I’ve long suspected that these may have been the first couple issues of an intended INHUMANS series, cut up and repasted into these little lost back-up stories. These were reprinted somewhere at least once but they’re still pretty obscure and unknown. When THE INHUMANS series next surfaced in AMAZING ADVENTURES a few years later, Kirby would still be at the helm but by that point he was on his last legs at Marvel and it showed.
Posted by Booksteve at 7:13 AM