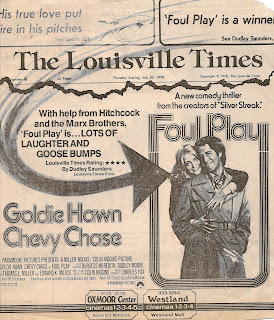 SILVER STREAK (1976) and FOUL PLAY (1978) are two of my favorite seventies films and two of the best neo-Hitchcock films of all time. The Hitchcockian thriller had become almost a subgenre of film by this point with Brian DePalma and Jonathan Demme leading the pack but I think Colin Higgins topped them with these. SILVER STREAK, set almost entirely on a speeding train, features Gene Wilder in the everyman role Hitch often assigned to his leading men. There was a cool (if non-blonde) female lead and a truly menacing villain in Patrick McGoohan. FOUL PLAY made the girl (Goldie Hawn) the everyman and had a marvelous mix of light and dark comedy. As freakish killers try to kill a shy librarian for the secret microfilm (the McGuffin) her secret agent date slipped to her, she teams with a policeman who may or may not be what he seems. Dudley Moore, in the role that jumpstarted his soon-to-be American superstardom, appears as a lecherous musician, Burgess Meredith as a wily old snakehandler, and Chevy Chase in his acting debut as the police officer. Chase, here, is a dream. Cool, cocky, funny and focused, he is a joy to watch not just because of his obvious chemistry with Goldie but because he shows nary a trace of the selfindulgences that would almost immediately derail his promising acting career. After FOUL PLAY, he turned to a series of less than funny vehicles, many of which he seemed to be sleepwalking through. Okay, so some were hits. They still weren’t particularly good and Chase was sadly often the worst part of them. Even a second attempt at teaming him with Goldie a few years later in SEEMS LIKE OLD TIMES was unmemorable. 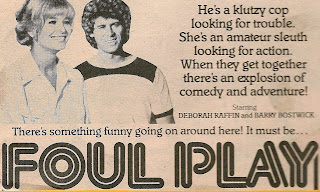 I first saw FOUL PLAY with my parents at a sneak preview about two weeks prior to the official opening. I had never heard of it until the day we went to see it. It was a sell-out crowd with standing-room only, something I never saw again! There were cheers and laughter and a house full of applause at the end, again something I never saw again.
Remade as a short-lived television version a few years later with Barry Bostwick (looking decidely "Mike Bradyish") and Deborah Raffin (now an amateur sleuth!), the magic was missing. The movie itself, which aired just last night on cable, still holds up in every possible way. Barry Manilow’s theme, "Ready to Take a Chance Again" is a perfect start and every single scene is perfectly paced for optimum suspense and/or comedy. Writer/director Higgins never again attempted this type of thriller and died ten years afterwards, a relatively early victim of AIDS. To me, though, his legacy was this shining and enjoyable tribute to Hawn, Chase and Hitchcock.
Posted by Booksteve at 1:37 PM