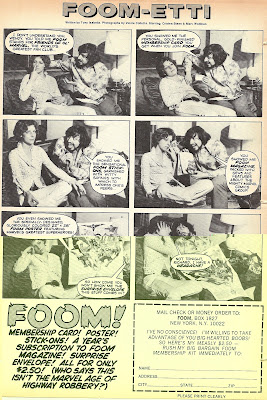 Marvel Comics has had several officially sanctioned fan clubs over the years, the most nostalgic being the M.M.M. S. (the Merry Marvel Marching Society, a pun on the 1940's "Mary" Marvel Marching Society), the most unfulfilled in expectations being the late sixties' Marvelmania and the most forgotten being the seventies F.O.O.M. (the Friends Of Ol' Marvel). F.O.O.M., if remembered at all, is usually recalled for the participation of Jaunty Jim Steranko some years after his peak creative period at the company. Today, though, we offer this interesting fumetti (a picture comic strip in case you didn't know) ad for the club. Photographed by the much maligned inker Vince Colletta and starring now legendary comics scribe Marv Wolfman (never met him but I stood behind him in line at a Chicago hotel once when he was having major issues. Didn't seem the right time to introduce myself, y'know?) and someone named Cristen Steen. Hmmm...Don't know her but wonder if she could be the "Kristen/Kirsten/Christine" Steen listed on IMDB from a number of seventies cult flicks including TEENAGE HITCHHIKERS and ALICE IN WONDERLAND (the adult musical version). If so, how'd she end up a Friend Of Ol' Marvel? Perhaps our on-the-mend Net-buddy Tony Isabella, who's credited with writing this mildly amusing ad-strip ( from CRAZY) could enlighten us?? Hope all is well, Tony!
Posted by Booksteve at 9:20 PM