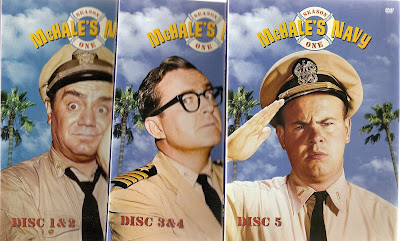 My early Fathers’ Day gift (early because we had a 40% off coupon) was Season 1 of McHALE’S NAVY on DVD. An early favorite, I really hadn’t seen many episodes of the 1962-66 TV series since meeting co-star Bob Hastings about 15 years ago. Bob played the fidgety, sycophantic, brown-nosing Lt. Elroy Carpenter on the World War II Naval comedy, a character I was surprised to see was not in the original first episode (the actual pilot—which does NOT appear her strangely—was a dramatic show entitled "Seven Against the Sea"). Carpenter works for Capt. Binghampton, played by the uniquely comical Joe Flynn, a little exasperated man with big glasses. When I first met Bob at the Cincinnati Radio Convention, Flynn (who went on to be a popular character actor but ALWAYS played that same type) was all anyone wanted him to talk about.
The series is a great ensemble like the later M*A*S*H with Oscar winner (for MARTY) Ernest Borgnine, one of the great movie "heavies," as Quinton McHale, heading up a group of misfits who’d never let the war interrupt their otherwise hedonistic island lifestyle. The great and hilarious Tim Conway (who once came in the store where I worked but I was off that day! AARGH!!) steals most scenes he’s in with ease as Ensign Charles Parker, a by-the-book nebbish slowly being corrupted by McHale. The rest of the great cast includes handsome Edson Stroll, Gavin (THE LOVE BOAT) McLeod, the likable but ill-fated Gary Vinson and best of all fast-talking Carl Ballantine (as in "Ballantine the Magician!") as conman Gruber. When you consider that some of these episodes were written by Joseph Heller who would later write the classic anti-war novel, CATCH-22, one must pause to wonder if he brought some of McHale’s men to his later story!
The episodes are great fun if a little too politically incorrect (in terms of 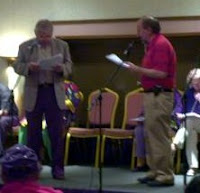 WWII era negative racial terminology) to run regularly in reruns today. Lots of mishaps with the boys having to actually be heroes in order to stop threats to their fun or outwit the Captain and Carpenter trying to find an excuse to court martial the whole bunch.
The only extra is a 2007 reunion with most of the surviving cast members including Bob. It’s so cool to see him chatting with Tim Conway and Ernest Borgnine just a couple months before I appeared on stage with him again (for about the 18th time!) as a mouse at this year’s Radio Con. My son was recently wondering what Kevin Bacon’s got that I haven’t! The reunion is fun but as always Conway steals the show. At one point he says that most of the roles were very similar to the actors in real life to which Bob tells him to watch it! Stroll still looks great in his seventies, Bob looks much younger than his 82 years, Borgnine has thinned down and looks just like Don Rickles (!), Ballantine is just as crotchety as you’d suspect and Tim is still very much Tim! Don’t know where Gavin was but they all seemed to be having great fun. In an outtake at the end of the reunion, someone implies that they shot hours of footage of these guys sitting around reminiscing. I would have watched it all!
Hopefully future season sets will include that TV pilot (which I have on VHS somewhere from TV Land) and some of the great blooper reels that surface from McHALE’S NAVY from time to time.

By the way, the shot above is your humble host onstage playing opposite Bob Hastings two months ago at this year's Cincinnati Con.
Posted by Booksteve at 3:22 PM