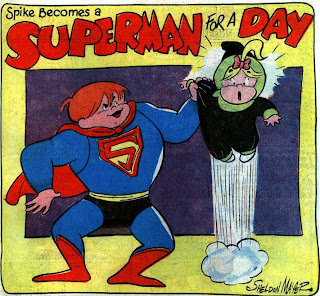 Pressed for time today but I wanted to share this adorable shot from SUGAR AND SPIKE # 32 published in 1959 (when I was about their age myself!). Often credited with being the key player in the fact that Siegel and Shuster's SUPERMAN concept ever got published at all, here's Sheldon Mayer's take on his own Spike as the Baby of Steel. This was, alas, just a symbolic splash panel for a typically hilarious S&S story.
Posted by Booksteve at 11:15 AM