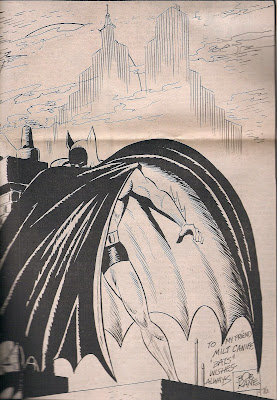 Well, thanks to a few donations from you generous folks out there I was able to afford a new scanner and now, for the first time since early November, we present a newly scanned image from Booksteve's Library! This image of a 1976 drawing of everyone's favorite Caped Crusader done (presumably) by the notoriously ghosted Bob Kane for legendary strip artist Milton Caniff is incomplete, partially out of focus and was nightmarishly hard to actually get to where I needed it to be. Hopefully, that will change as I get used to the new scanner. I do find it amazing how more modern technology has complicated the simple joys of hitting a button and opening a file. Sheesh! Still, with any luck, you can look forward to some long overdue stuff from here at Booksteve's Library coming up in the days, weeks and months to come! That doesn't mean we'll give up the rare comics ads though as they've proven surprisingly popular for what was originally intended as filler! Thanks to everyone for their continued support!
Posted by Booksteve at 8:32 PM