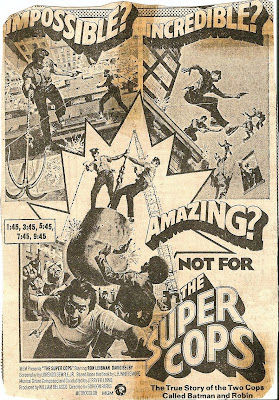 The book THE SUPER COPS by L. H. Whittemore was a bestseller from 1973 about two daredevil police officers/detectives who were, due to their at times reckless exploits, nicknamed "Batman" and "Robin." The real life detectives, Greenberg and Hantz, made the round of talk shows in the day but by the time the film based on them came out just a year later, they were already old news, supplanted by the ironically more realistic police novels of Joe Wambaugh.
THE SUPER COPS is not a bad little film as it episodically details their meeting and their adventurous patrols and cases. The most interesting aspects, though, are the folks behind the scenes. The screenplay, for example, is written by one Lorenzo Semple, Jr….best known as one of the major writers of the BATMAN TV series. Guess they figured who better to write about the exploits of Batman and Robin. He also wrote the 1966 BATMAN movie and later returned to super-heroes with the scripts for SHEENA and FLASH GORDON. The director is, in fact, the late great Gordon Parks, the brilliant African-American photographer and previously director of THE LEARNING TREE and the seminal blaxploitation film, SHAFT!
The stars of the film are Ron Liebman, a loudmouthed New York stage actor later known for a well-done but short-lived TV series entitled KAZ (and for a tempetuous marriage with equally loudmouthed actress Linda Lavin) and David Selby, coming off several years of teen-idolhood as DARK SHADOWS’ sexy, sideburned werewolf/ghost Quentin Collins. Neither actor really made it as a screen star but both have continued to be welcome presences on TV and in film from time to time.
The real detectives acted as advisors and appear in small roles in the film. Anybody know whatever happened to Batman and Robin?
Posted by Booksteve at 7:19 PM