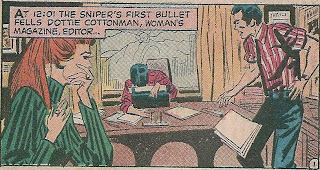 When Carmine Infantino took over at DC in the late sixties, he made longtime JLA artist Mike Sekowsky an editor. Sekowsky proceeded to radically change all of the characters with which he was entrusted. Most extreme of these changes was the fact that Wonder Woman, AKA Diana Prince, was remade into a karate-chopping, mod Diana RIGG type with a male Chinese mentor named I Ching. 25 years of continuity were scrapped as Diana lost her powers and, after decades of near male-bashing, bowed and deferred to this guy she had just met! All things change, however, and 1940's WONDER WOMAN writer/editor Dorothy Woolfolk, one of the first ladies of comics, was brought in. She lasted only one issue before hot editor Denny O'Neil took over with some unusual covers by Jeff Jones and rare comic book writing from Samuel R. Delany! I Ching was moved to the background and the writing and art both improved during this sadly brief period. Yep, it only lasted a few issues before someone at DC suddenly decided to once again very suddenly scrap several years of continuity and go back to the original Wonder Woman concepts. Perhaps this was because of selling the TV movie rights as the Cathy Lee Crosby movie we mentioned earlier was just a year or so away. On the other hand, it may well have been simply declining sales. Either way, longtime WW writer/editor Robert Kanigher was reinstated on the book and in the span of just a few pages murdered Ching, had Diana forget him, had her recover her powers (with no real explanation) and return to the Amazons. Just like that. One has to wonder, however, exactly what Kanigher had against DorothyWoolfolk as right there on page one, the very first victim of the random sniper is described as woman's magazine editor, Dottie Cottonman. Cotton Man=Wool Folk. It's an in-joke reference but a rather cruel one. Anyone know any more details on this one? Were the other named victims-Jimmy Greene and Mary and John Mason--real-life references also? The art here is by Don Heck.
Posted by Booksteve at 11:47 AM