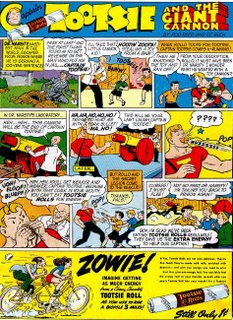 Here we have yet another Tootsie Roll commercial in the form of a comic strip. If CAPTAIN TOOTSIE was, as we have stated previously, similar to CAPTAIN MARVEL, then this installment presents Dr. Narsty, the strip's bald, lab-coated equivalent to Marvel's arch-enemy, Dr. Sivana. This installment is, in fact, credited to Marvel's pappy, C. C. Beck and Rod Reed, a longtime writer for the Big Red Cheese.
Posted by Booksteve at 10:59 PM