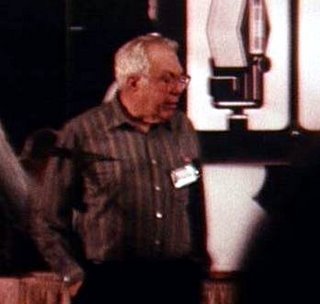 For the third Old Time Radio and Nostalgia Convention in Cincinnati (nearly twenty years ago now. Geez!), I adapted and directed a script called RESULTS INC. starring an all amateur cast. The hardest part was the special effects. We ended up tape recording endless variations on footsteps and doors opening. For gunshots, we had a box full of balloons and a paddleball paddle with a nail driven through it. We would rapidly pop the balloons and it worked fairly well. The following year, however, they brought in a pro.
Barney Beck was an absolutely delightful gentleman with a million stories and a great sense of humor. In the golden age of radio, he reportedly worked at various times on episodes of BOBBY BENSON, SUPERMAN, BOB AND RAY and THE SHADOW. Barney’s area of expertise was all but a lost art by the time we met but he took pride and delight in sharing it with all and sundry, both on a one on one basis or in groups. During the live on-stage re-creations, I sometimes just watched Barney running around his little sound effects area stage right. He knew exactly what, when, where and why and watching Barney at work was often like watching a skilled dancer. On the other hand, when he flubbed up (which was rare) he laughed louder than anyone and urged the cast to go on so as not to throw off his timing. One of the best compliments I ever received was when Barney told me after I acted in a re-creation performance that I was born 40 years too late and had missed my calling.
Barney Beck became a fixture at the Cincinnati Con for years until illness forced him to give it up. This past week, word came that Barney had died at age 86. Thanks for sharing yourself and your very special art form with all of us, sir. May your footsteps creak forever in our memories.
Posted by Booksteve at 9:30 AM