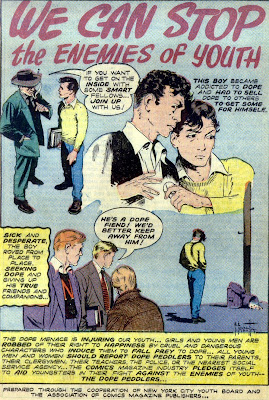 In the seventies, I was never one to worship at the altar of Frank Frazetta. Oh, he was okay I guess... if you liked rippling muscles, buxom beauties and bloody swords. I respected him as a highly stylized illustrator. It’s just that his style wasn’t to my taste. Everyone else seemed to equate Frazetta with God however! His comic book work is negligible and was virtually nonexistent by the time I discovered his work in the sixties. Frank was doing paperback cover paintings and the occasional piece for Warren magazines like CREEPY and VAMPIRELLA. In the early seventies, however, he was the first lowly comic artist (again, if you could even call him such) to be treated to not one but a series of "ART OF…" books from a major publisher. I bought a few of them…used…but just never really saw the attraction. I don’t DISlike the man’s work at all. Some of it is marvelous, exciting and genuinely sexy! The man himself is fascinating (as witness the recent documentary, FIRE AND ICE). I just couldn’t figure out what all the fuss was about! By the time I looked closely at Frazetta, I guess he couldn’t possibly have lived up to the hype. Anyway, here’s a semi-rare signed one page anti-drug message from Frank, published in DAREDEVIL COMICS (among others?) waaaay back in the late 1940’s!
Posted by Booksteve at 6:26 AM