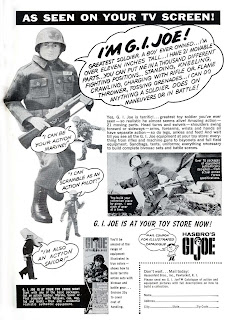 One of the very first toys I actually remember requesting (politely of course), roughly age six, was GI JOE. They were everywhere! This ad from a mid-sixties comic points out that the toy was familiar from television—commercials that is! I actually never had the Army guy, the Air Force guy or the Navy guy. No, "Santa" got me the Marine guy that year. No disrespect but I wasn’t even sure what a Marine WAS at that age! Perhaps adding to the confusion was the fact that the only accessory I ever got for my Marine Joe was the snowsuit set! Well, the only one we bought anyway. A few years later (1971 I believe) I traded Timmy Wheeler some comic books (Surprisingly, I don’t recall which ones) for the GI JOE helicopter. Now this thing was freakin’ humongous! The chopper blades alone had a wingspan of about three or four feet. I soon found out that was probably why Timmy traded it. Even though the blades were removable, you couldn’t store the darn thing! It was always there! Sigh.
Not long after my initial JOE, they came out with CAPTAIN ACTION and my collecting mentality (and perhaps the fact that no one I actually knew was in the service or had a brother in Vietnam or anything like that) led me to obsess on him for the next few years instead.
Toymaker Hasbro later revived, revised and reinvented GI JOE to be something very different (and to me not very interesting) from its initial action figure beginnings leading to a massively successful marketing campaign, TV series and long-running comic book!
Posted by Booksteve at 9:00 PM