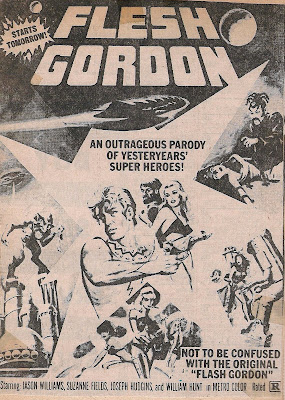 FLESH GORDON was a mid-seventies porn spoof that had its hardcore scenes cut out (note the retouched bosoms even in this ad!)and somehow managed to end up in major release AND even get good reviews! Designed to resemble the 1930’s serials, the special effects were done by a bunch of young Turks (some of whom would go on to do STAR WARS just a couple years later) and a ringer or two like Jim Danforth. The lead "actor," one Jason Williams, was suitably stilted but the other roles were played by scene-chewers of the first order. Even character actor John Hoyt was along for the ride as Flesh’s dad! The voice of the King Kong-like monster who kidnaps Dale Ardor was done by future Mister Incredible, Craig T. Nelson. As released, the movie was a silly softcore sex parody with stupid juvenile jokes but nonetheless endearing and enjoyable because the filmmakers clearly respected the source material.
What struck me to bring this all up was this other ad for the huge budget , campy FLASH GORDON of a few years later with Boris Vallejo's painting of Sam Jones looking an awful lot like Jason Williiams pose in the FLESH GORDON ad. His acting was about the same, 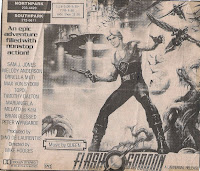 also. In fact, the acting in FLASH was overall on a par with that in FLESH, the jokes almost as juvenile and the sex scenes not as interesting! Brilliant Swedish actor Max Von Sydow chewed the scenery as Ming the Merciless almost as well as William Hunt, the guy who played Emporer Wang in FLESH!! Queen, at one of their lowest ebbs, did the inappropriate score for this one and the special effects quite frankly weren’t as good as those in the earlier no-budget porn predecessor! The problem, I believe, was simply that Producer Dino Delaurentis was looking for a way to cash in on STAR WARS success and was incapable of realizing that it was successful because the people behind it genuinely LIKED the old serials!
There was a dreadful (and not in a good way) sequel to FLESH GORDON many years after the fact but you’ll note that there has been no big-screen, big-budget versions of FLASH GORDON lately at all. Knowing his love of pretty girls, I think creator Alex Raymond would probably have preferred Flesh to Flash.
Posted by Booksteve at 8:42 PM