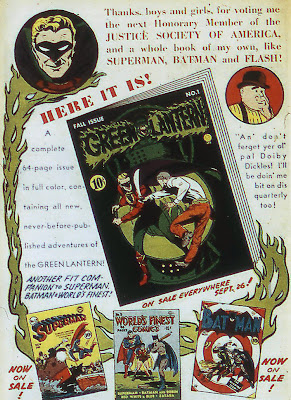 I'm on record as being a big fan of the Golden Age Green Lantern. I first discovered the strangely RED-costumed crusader in his second team-up with his modern-day counterpart in the mid-sixties and followed him through many JLA-JSA team-ups and well into his various 90's and beyond incarnations. The book THE GREAT COMIC BOOK HEROES showed me his origin as originally published in ALL-AMERICAN COMICS and a number of reprints followed throughout the seventies before DC's Archives series finally got around to Ol' GL. The Archives reprinted GREEN LANTERN from issue # 1 but by the time that issue had been published, the original ring-slinger had already had numerous adventures in ALL-AMERICAN, ALL-STAR and (I may have the timing off on this one) COMIC CAVALCADE. In keeping with corporate policy, GL was demoted to honorary JSA membership with this issue of his own mag. That silly idea would later be dropped and Alan Scott appears with the JSA every month even now!
Posted by Booksteve at 8:29 PM