Movies That Fell Through the Cracks # 22 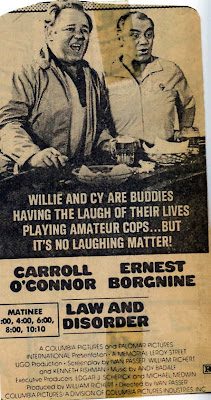 LAW AND DISORDER was a decidedly strange little R rated comedy-drama that snuck into second string theaters on its first run in 1974. Starring Carroll O’ Conner near the absolute height of his fame on the long-running ALL IN THE FAMILY (although I’ve always suspected it may have been shot earlier and shelved as witness the small role for then hot Karen Black) one would have thought the film might do better than it did. Instead, it went virtually unnoticed. O’Conner co-stars as a cabbie who, along with fellow New Yorker Ernest Borgnine (whose Academy Award winning career was then on a post-POSEIDON ADVENTURE upswing) becomes an amateur police officer in an attempt to clean up the neighborhood. At first it’s a lark and the pair bumble through their rounds like characters on a bad sitcom but eventually violent reality sets in and the picture gets dark. It drones on far too long before ending on a hackneyed note (that my father nonetheless loved!) but it has moments where it’s fun to watch Carroll prove he wasn’t just Archie Bunker and he and Borgnine play off each other quite well.
Posted by Booksteve at 4:05 PM