The Strangest Sub-Mariner Tale of Them All 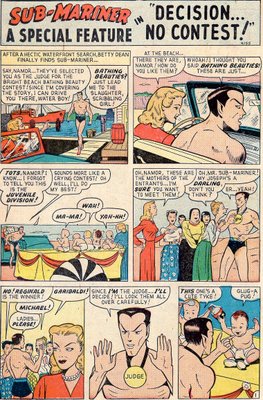 All of us comics fans know Prince Namor, the Sub-Mariner, Bill Everett's masterful anti-hero and the very FIRST Marvel super hero. Namor who fought his way through New York City and fought the Human Torch, Namor who was tried and convicted of murder, Namor who was ret-conned into the Invadersand fought nazis alongside the Torch and Toro and Captain America and Bucky, Namor who was awakened from years of amnesia to battle the Fantastic Four, the Avengers and Daredevil, Namor who regally defended the throne of sunken Atlantis from the likes of Attuma and Krang. Yeah, yeah. "Imperius Rex" and all that. Here, however, we offer two pages showing the one true Sub-Mariner in a 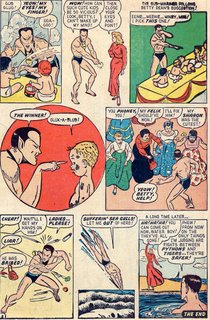 different and perhaps thankfully forgotten light! This is from MARVEL MYSTERY # 89 from 1948.
Posted by Booksteve at 12:10 PM