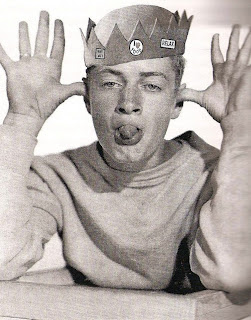 When I was a kid, I used to think it would be cool if I met some of the actors I would see on TV and maybe even be friends with them. Never thought it would really happen of course. Then, over the years, I found it almost surreally coming true. One of the single neatest folks I ever met from the world of show biz was radio actor Harlan Stone. Everyone called him Hal. Reports are coming in that Hal died today apparently from complications from what he led folks to believe would be fairly routine surgery.

Hal Stone’s biggest show biz claim to fame was a long run as classic sidekick Jughead on the ARCHIE ANDREWS radio series. Following that stint, he spent decades directing mostly TV commercials and by all accounts enjoying it immensely. He was smart, gentlemanly, and genuinely witty but also a curmudgeon of the first order. I worked opposite him as an actor in old-time radio re-creations and under him as a director. During casting, he was amazing to watch as he cast multiple roles by ear and instinct. As a director, he appreciated that the actors—even those of us who were and are amateurs—knew what they were doing by the time we got to a read-through and took a nurturing but essentially hands-off role when it came to anything but timing. Having portrayed Jughead twice myself opposite original ARCHIE ANDREWS Bob Hastings, I was initially disappointed when Hal started coming to the shows knowing that he owned that role. That first year, though, we met up in the hallway of the hotel and exchanged an impromptu conversation in full Jug voice to scattered passerby applause. That won me over. He signed a copy of his autobiography to me a couple years later and then wrote me a nice email when I reviewed it here at the Library about a year ago. In recent years he had become a welcome fixture of the radio conventions and a keeper of the flame for OTR on various web boards and newsletters. He was scheduled to be at the Cincinnati Old-Time Radio and Nostalgia Convention again in April. I’ll really miss my friend. Thanks, Hal.
Posted by Booksteve at 8:17 PM