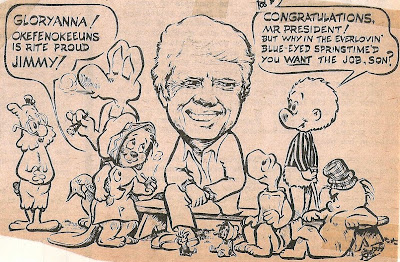 By now anyone who cares has probably heard of Fantagraphics' noble plans to take yet another run at reprinting the complete POGO comic strip by Walt Kelly. What folks tend to forget, however, is that in later years Kelly had quite a bit of assistance on the strip including from his wife Selby who took over the strip eventually after her husband's death. The strip still only outlasted its creator by a couple of years. Even though Selby Kelly could do a decent approximation of Walt's art style, his humor, pacing and political viewpoints were unique. Here, though, is the very first official POGO art to appear after the strip's end in 1975. This cute piece was done by Selby Kelly in 1977 to welcome fellow Georgian Jimmy Carter to the White House long sought in the strip by the denizens of the Okefenokee Swamp. According to reports at the time, it was sent directly to Carter in Washington. Wonder if the COMPLETE POGO series will include this?
Posted by Booksteve at 5:25 PM