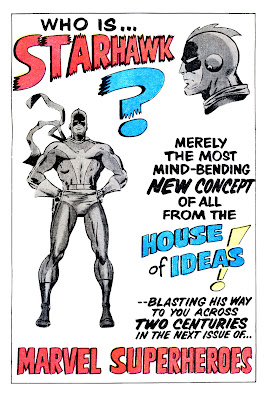 One of the great lost comics from the late Silver Age, here's the only comic book appearance of Dan Adkins' STARHAWK, seen here in the next issue ad from MARVEL SUPERHEROES # 20 in 1969. When the issue arrived, it instead featured all reprints...as did every issue from that point with no explanation. The only other official appearance of STARHAWK was in an issue of MARVELMANIA where the few completed pages appeared and, quite frankly, didn't look as good as fans had hoped. An Adkins cover of STARHAWK, perhaps intended to have been the cover on MSH # 21, turned up on THE BUYERS GUIDE FOR COMICS FANDOM in the early seventies.
Posted by Booksteve at 11:48 PM