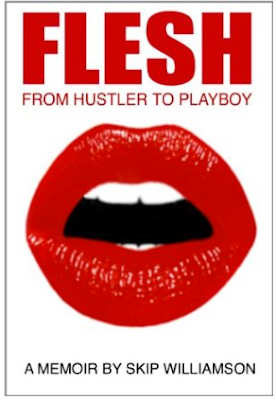 The "ME DECADE" wasn't called that by accident. Around here, as a teenager, it seemed pretty normal to me but in grown-up circles all across the land, the seventies were most certainly crazy, hedonistic times.

Artist/designer/cartoonist and underground comix pioneer Skip Williamson has written a memoir of surviving the decade where excess was expected and applauded in spite of its inherent dangers. Not for the faint-hearted and most definitely NSFW in these more conservative times, FLESH follows Skip out of the undergrounds and into big business, working at GALLERY, HUSTLER and, most importantly, PLAYBOY. There's no build-up, no back-story and no preparation. We take whatever our preconceived notions of the protagonist might be--if any--and then get to know the real Skip as we read along.

We see Skip working at GALLERY, originally a note-for-note rip-off of PLAYBOY. We follow the folks behind GALLERY through some shady Chicago shenanigans. These end up with strip club owner Larry Flynt being brought in to save the mag but ending up creating his own skin-mag, HUSTLER, instead…and taking Skip to be HUSTLER's first Art Director…briefly. All along the way, there are more and more shady characters, perhaps perpetuating the myth that everyone in Chicago business or politics has mob connections…or perhaps proving it not to be a myth after all!

And there are drugs. Lots of mind-altering substances of one sort or another. And sex. To read this, one might think that it was almost expected that men and women would just casually sleep with one another in the seventies. Well, in some circles, it kind of was! Again, hedonism was the order of the day--Disco, Cocaine and casual sex was everywhere--not just in New York and Hollywood! When reading about the seventies, one should never be judgmental. It might have looked more like today than the sixties--in spite of the leisure suits---but it was very much a different world.

Women play a major role in Skip's story and, in some cases, his descriptions are quite creatively pornographic. There's also unvarnished reports of startling violence, a somewhat bitter rant on the worthlessness of people and a uniquely insider view of the workings of PLAYBOY in that weird time between its biggest success and its later attempts at a comeback.

Speaking of PLAYBOY, Hef is one of the few characters, Skip himself included, who comes across relatively unscathed in FLESH. Among the other cast members of Skip's life in the seventies who put in appearances are Harvey Kurtzman, Robert Crumb, Jay Lynch, Grass Green, Bette Midler, Barry Manilow, Stiv Bators and Deborah Harry. Not a one of them is as interesting as some of our hero's lesser-known but often more-screwed-up pals and co-workers.

FLESH is only available as an E-book for Kindle but at only $2.99. There are unfortunately a lot of typos and misspellings in some areas along with some repetition that a good editor would have caught. It's a quick read, though, and well worth the price. The flaws actually add to it in a way, making you feel like you're just sitting around with the man who brought the world Snappy Sammy Smoot while he regales you with sordid but true tales of debauchery and survival as only a truly good storyteller can relate them.

What's that you say? You don't have Kindle? Neither did I but Amazon has FREE Kindle apps that one can download for Mac, PC, IPhone, Blackberry or other forums! That's FREE! And the books are inexpensive. If E-books are truly the wave of the future, may I suggest you try them out with Skip Williamson's FLESH!

Posted by Booksteve at 1:18 PM