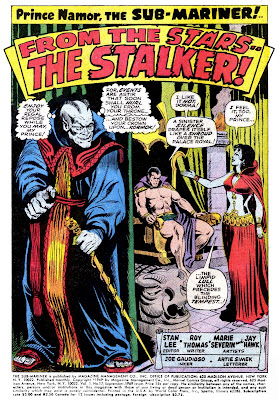 It's the summer of '69 and this issue's splash has a very cinematic look. Imagine the opening shot of the villain with his narration whilst you hear others speaking in the background. Then, slowly, the camera moves in on them and we see it's Namor and Dorma in the throne room discussing court intrigue.
Art here is credited to Marie again but also co-credited to one Jay Hawk. Hawk was, in actuality, Jack Katz, a veteran comic artist with a unique scratchy style and recognizable faces on most of his characters. The blue guy here, at least, would seem to have a Katz face.
Jack would never really make it in mainstream Silver Age comics or beyond but he would become a pioneering independent comics publisher when he serialized his own sci-fi epic graphic novel, THE FIRST KINGDOM starting in the mid-seventies.
No idea why he used a pseudonym here but Esposito, as inker, continued to use his also. What, no one wanted to be associated with Subby?
Posted by Booksteve at 12:41 AM