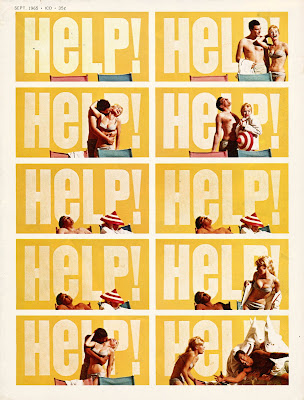 I am developing a documentary on MAD Magazine founder Harvey Kurtzman and his influential, early 1960’s humor magazine HELP! Working with fellow producer Terry Gilliam (Monty Python) and director Bruce Sinofsky (Metallica: Some Kind of Monster, HBO’s Brothers Keeper) as well as the cooperation of the Kurtzman estate, we feel that this is an amazing and underappreciated story in American cultural and comedic history.

As this is a film about artists, illustrators and the creative process, I thought that you might know some people who would want to be a part of this film. Right now, our two biggest needs are finding people who either knew Harvey (and were involved with HELP!) and most importantly, that dreaded word that every filmmaker dares to mention: Investors.

We could go the Kickstarter route with this effort, but I feel that there may be enough power in the artist community to bring in the funding we seek. Right now, we are about $250,000 short of our current fundraising goals. If there were people willing to invest, or even make a donation toward this film, it would go a long way to insuring that we get most of the wonderful, talented and sorry to say, old timers on camera before it is too late.

Any thoughts or ideas on this subject are most welcome. Thank you for your continued support for this film.

For those who may be unfamiliar with HELP, it was more of its time than was the original MAD. HELP was influential for its use of new artists, many of whom (Skip Williamson, Gilbert Shelton, Jay Lynch and Robert Crumb to name a few) would go on to be the first generation of the Underground Comix movement. Feminist icon and MS magazine publisher Gloria Steinem learned the ropes at HELP. Her replacement was Terry Gilliam who met John Cleese through HELP which later led directly to his being involved with MONTY PYTHON. The earliest revival of Will Eisner's SPIRIT was in HELP. The Kurtzman/Elder strip that would become PLAYBOY's LITTLE ANNIE FANNY ran in HELP and Kurtzman also pioneered the American usage of photo-comic strips in HELP.

Posted by Booksteve at 5:56 PM