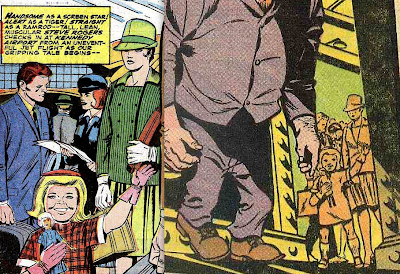 We wrote about this quite a while back but printed only the black and whote scans from the reprints. Here, from the originals, is a bizarre example of a Kirby swipe. Now, Kirby swipes are not exactly rare. Poses, costumes, layouts, krackle, characters, faces...you see swipes and homages all the time throughout the history of comics. But this? Literally background characters in a CAPTAIN AMERICA splash, swiped and placed even more in the background in the METAMORPHO comic at right. Seems rather...unusual to say the least.
The Kirby Cap was on the stands (TALES FROM THE SUSPENSE) in early summer of 1967. Putting the lie to the oft-told legend that DC people didn't read Marvels at all, the swipe appeared before the end of that same year from the competition! The credited artist on METAMORPHO was Sal Trapani, an illustrator known for sub-contracting his work out to others including at times Dick Giordano or Steve Ditko. Because of this, I'm not familiar enough with Trapani's own style to know if it was actually he who drew this issue. Doesn't help that whomever it is is imitating the style of the series original artist, Ramona Fradon.
I wouldn't have recognized it at all if not for that little girl who seems so out of place in the Kirby page, waving directly at the reader. I remember even as a kid wondering if she was perhaps the artist's daughter or niece or something. Seeing her again in the other page when DCreprinted it in their first SHOWCASE edition is what made the image stand out.
She doesn't even look to me as if she was drawn by Jack Kirby so I speculated that inker Joe Sinnott had perhaps added her in as a shout out to someone. A few years ago, thanks to Fred Hembeck, I was able to check with Mr. Sinnott who assures that, in fact, the little girl was Kirby-drawn. He just inked her along with the rest of the page but had no idea the whole thing appeared again later at DC.
Below are the original full pages on which the images can be found. 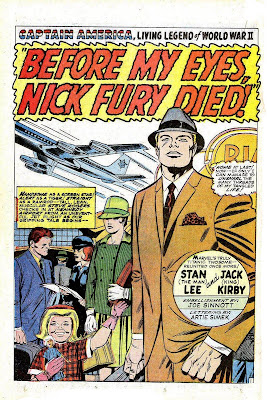 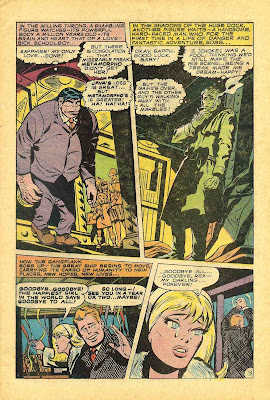