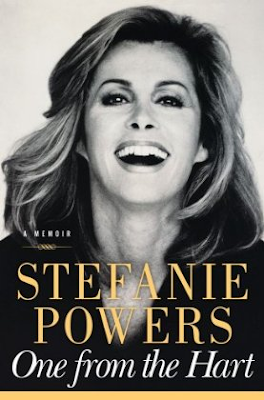 Longtime readers will recall that the very first celebrity I ever wrote a fan letter to and heard back from was Stefanie Powers. That was in 1972. I had enjoyed her on THE GIRL FROM U.N.C.L.E. in the sixties and then followed her as she guest-starred in just about every TV series I enjoyed during the period immediately after that.
Recently I picked up a used copy of Ms. Powers' memoir, the rather obviously entitled ONE FROM THE HART. It's not a bad book per se...but perhaps a better title would have been THE WILLIAM HOLDEN STORY.
Stefanie took up with the older actor, Holden, in the early seventies and they bonded over a love of wild animals and Africa. While there is no doubt that the relationship radically transformed who she was, there are times here where one learns much more about William Holden than about Stefanie Powers. Holden's alcoholism was a continuing issue and eventually drove an insurmountable wedge between them but, even after his death, our heroine managed to carry on his conservation efforts in Africa.
Oh and there's also quite a bit about her life and a comparative little about her career before and after William Holden...but not as much really as you'll find on her website.
ONE FROM THE HART--If you're a Stefanie Powers fan, it's a quick read that you'd probably enjoy but I definitely recommend if you're a fan of William Holden.

Posted by Booksteve at 1:10 PM