There are scores of TV pilots announced annually but very, very few of the ones actually shot ever see the light of day. Most often, this is a good thing, as in the case of the aborted Fox revival of MISTER ED from 2004 that featured Sherman Hemsley as the horse and virtually nothing but off-color jokes! Even the writer/producer committed suicide! What were they thinking?
Today, though, we're talking about one of those that might actually have worked given time. AREA 57 was a 2007 sitcom pilot with a sci-fi twist. Like this year's WONDER WOMAN, it got some big buzz but then was not picked up.
AREA 57 tells the story of a new man assigned to a top secret military base (a la Area 51) where he is dumbfounded to discover that the US government has been holding a captured alien for observation for four decades. Just as he's finally about to see his new charge comes word that the alien has died. The base is to be quickly torn down and all the men reassigned, much to their joy. Then our hero accidentally revives the alien, thus endearing himself to no one.
When the two finally do meet, we see some vague binding but the alien is a trickster who loves to play havoc with his captors, thus setting up the type of relationship that would presumably continue as the series progressed.
The worst part of AREA 57 was, perhaps surprisingly, the alien. The casting of Paul Ruebens as the alien was considered quite a coup and the man who made Pee Wee would certainly seem a good choice. But he doesn't nail it. The alien makeup is only slight, making him look like a bald, slightly deformed human. His smugness and odd delivery was on the right track but needed refining if we were to sympathize with him at all.
What does work are the other three main members of the cast. The protagonist, a fresh-faced military man all neatly trimmed and clean shaven is, in spot of the resemblance...NOT this guy (Russell Tovey from the BBC's BEING HUMAN).

In fact, he is THIS guy---Matthew Lillard! Shaggy from the Scooby-Doo live action films! As John Lovitz' Master Thespian used to say, "ACTING!" Lillard brings the right amount of naiveté and charm to his role but doesn't really offer much in the way of military authority. 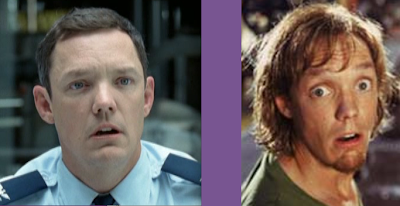 On the other hand, Bruce McGill as the base's General is perfect. He's gruff but absent-minded, eccentric, oblivious and long-accepting of his fate--similar to M*A*S*H's Col. Henry Blake. I kept looking at this actor and his oh-so-familiar and comfortable face but I couldn't place him. Finally I looked him up. Oh my gosh! D-Day from NATIONAL LAMPOON'S ANIMAL HOUSE!

Finally we have GLEE's Jane Lynch in the role of the General's aide. Continuing the M*A*S*H connection, her character is essentially Radar, anticipating and protecting the General so he can pay more attention to his golf game.

Would AREA 57 have been a good series? Obviously there's no way to tell. I definitely would have ordered a second pilot and retooled the alien makeup and characterization. If it had been successful, though, would we have had Ms. Lynch on the mega-popular GLEE? Would we have had GLEE? Would we have had the stage revival of Pee Wee Herman that Ruebens achieved last year? Things, as they say, happen the way they're meant to happen...and AREA 57, the series, was simply not to be.
Posted by Booksteve at 8:34 AM