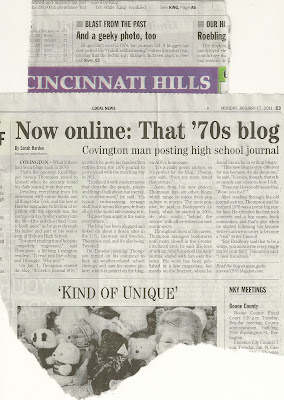 I'm still surprised at how much everyone has taken to my GEEK'S JOURNAL 1976. Delighted, mind you...but surprised. Seen above is a clipping from today's CINCINNATI ENQUIRER. Tomorrow I'm supposed to do an interview with a British magazine. The other day I was privileged to receive quite a few favorable English language reviews but also a couple of nice foreign language reviews. The Russian one translated like this on BabelFish:
"We here write, we write, read, read, and certain Steven Thomson began to frolic by similar in the distant 70th. Now its periodical records of those years, are published in [bloge] - A Of geek's Of journal 1976. It appears amusingly. Can even not of fake."
Many thanks to all who have taken the time to read it, comment and review it in your own venues.
Posted by Booksteve at 8:41 PM