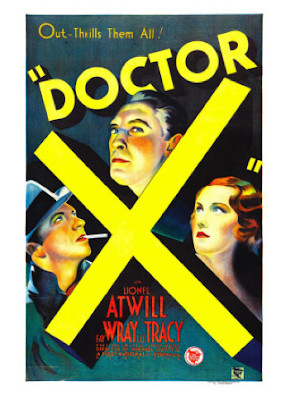 DOCTOR X (Both Versions)
In 1932, this horror movie featuring Fay Wray and Lionel Atwill was a financial success. Though released in a primitive state of Technicolor, the original theatrical release was supposedly destroyed. Over the years, a black and white print of this movie featuring different camera angles and brief extended scenes was available on the commercial market and late-night television airings. A few years ago a Technicolor print of this movie was discovered and restored. Now you can watch both the original theatrical release and the black and white version back to back. Compare for yourself . . . if you're not frightened.
Only $7.00 plus postage! Ultra-rare stuff from BOOKSTEVE RARITIES!
http://oldtimeradiotapes.homestead.com/StevenSiteMoviesAF.html
Posted by Booksteve at 5:32 PM