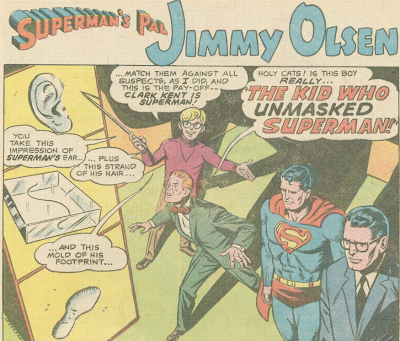 One of my long-held beliefs is that the secret of life is not knowing all the answers--it's knowing to whom you can go to find them. Thus when friend and Ace Researcher Derek Tague found himself recently remembering a SUPERMAN story from the 1950's in which someone nearly finds out the Man of Steel's identity because of a Clark Bar and a pack of Kent Cigarettes, he turned to me.
I also recalled the tale but I was pretty sure it was from the late sixties as opposed to the fifties and that it was a back-up story. A quick check of the Internet and the DC Boards showed that someone else remembered it, too. They wrote that it was a tale in which 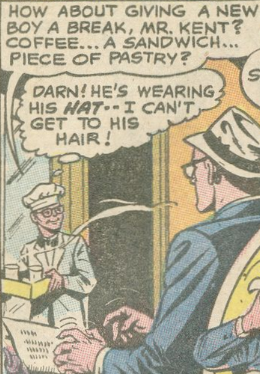 Clark was having dinner with a suspicious Lana Lang when someone bought the products and suddenly made her think...or something like that. That story was repeated on various sites as well as on Wikipedia. The inclusion of Lana made me think that perhaps it was in a SUPERBOY story--except for the fact that sometimes it's Lois, not Lana.
So I started digging through issues and listings and scans from the years I was convinced the story was published but found nothing. I found a few more clues, all seemingly pointing to the Lois and/or Lana version but not getting me
anywhere closer to the actual story itself.
Sadly, out of frustration, I gave up...for a time. In the great tradition of overgrown fanboys, I can never completely give up on a nagging question, however, and from time to time would randomly search through old issues or try a new search engine online for info.
Then last week I was watching a SUPERMAN documentary on television when I saw comics writer Mark Waid being interviewed. A sometime reader of this blog, I knew Mark to be an expert on Silver Age DC in general and Superman in particular. I also knew, as he had been in the comics news quite a bit recently, that he was a pretty busy guy, transitioning from his Boom Studios executive position to some new and highly anticipated creative endeavors coming from Marvel. One again, however, in that tradition of knowing whom to ask, I contacted Mark...and he knew the answer!! "JIMMY OLSEN # 115," he wrote. "One of my favorites! And it was a snoopy kid!" 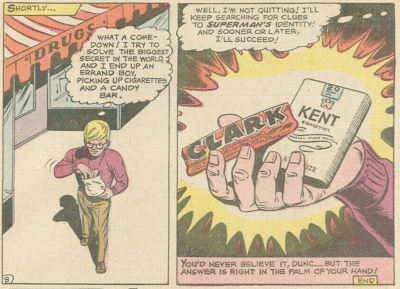 So Interwebs, you were wrong! It was neither Lois nor Lana! I, however, was right in that it was a late 1968 issue. It was the Pete Costanza-drawn backup in the issue featuring the semi-classic Neal Adams "Superdickery" cover with the Man of Might refusing to share his ice water with Jimmy and Aquaman in a desert.
"The Kid Who Unmasked Superman" is credited on GCD to veteran scripter Dave Wood. The title character is a precocious fellow named Duncan Brite who joins the Jimmy Olsen Fan Club just so he can get close to Superman and uncover his identity. In fact, this story is so much about Duncan that Jimmy himself disappears after page three of the nine page piece. Duncan manages to get a strand of super-hair, an ear impression, a footprint and other CSI-type clues, all of which point him towards Clark Kent. He then decides to simply follow Clark to work and quickly try to clip off a strand of his super hair. Disguised as a new delivery boy, Master Brite is frustrated when Clark is seen typing at his desk while wearing his hat in the great tradition of reporters in old movies...if not so likely in 1968. In the end, though, Clark catches on and makes the kid think he's secretly bald and therefore can NOT be Superman! Meanwhile, Duncan's pop calls in an order to the local store and sends the boy down to pick it up. Somehow failing to notice the irony, dear old dad has ordered...you guessed it...a Clark Bar and a pack of Kent Cigarettes!
Thanks, Mark. There you go, Derek! Next question?
Posted by Booksteve at 8:13 PM